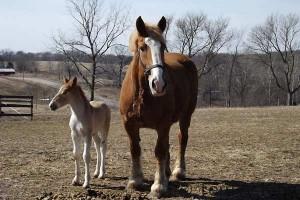 Belgians have been a traditional family favorite since 1950. They were originally used as a source of power for farming. Our emphasis continues and has been to produce the pedigrees of outstanding purebred horses, with correct confirmation and the ability to excel as a hitch horse. With the quality pedigrees our horses have, we may have something you are looking for. We usually have a nice selection of Belgian horses for sale. If you have an interest in a specific pedigree, we may consider breeding one of our mares to your stallion selection. Contact us for particulars. Thanks to all those who purchased from us in the past.